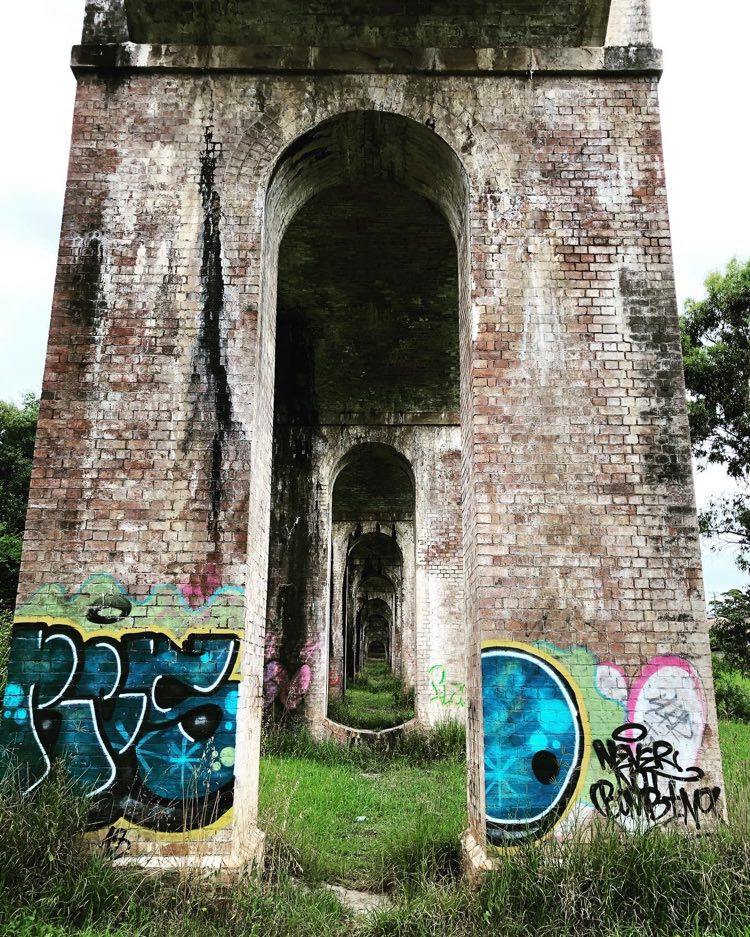 With international travel closed during 2020 and in the foreseeable future, and even interstate travel difficult with sporadic border closures, here are eight local hidden gems we recommend these holidays, all located within 30 mins drive from Eastwood.

Can’t visit Rome? The pretty Boothtown Aqueduct is a heritage-listed 19th-century water bridge in Greystanes. Established in 1888, the aqueduct was built to cross a valley to carry water from Prospect Reservoir to residents of Greater Western Sydney. Now used as a bike trail and walking track. The addy for the GPS is 2 Macquarie Rd Greystanes.

Nicknamed the Machu Picchu with graffiti, the North Rocks “Dam” is in fact a flood retarding basin. It has become one giant canvass for local graffiti artists. To find this huge imposing structure, drive to the end of Loyalty Road in North Rocks, and then follow the trail of graffiti on the signs.

Sydney-siders are blessed to live in suburbs with pretty waterfalls just behind our backyards. Terry’s Creek waterfall is tucked away on the boundaries between Eastwood and Epping. Unlike many waterfalls that can only be reached at the end of a long walking track, you can get to this waterfall almost straight away if you start at Anembo Place Eastwood. Instant gratification!

Once a brick manufacturing site, this land was to be redeveloped as part of the site for the 2000 Sydney Olympic but the discovery of the endangered Green and Golden Bell Frog placed a hold on developments. Instead, it became a nature park and walkway in 2006. This quirky 0.5km ring around the old quarry now makes a unique track for local walkers and runners and is also great for instagram photos. Parking available on Marjorie Jackson Parkway.

Can’t visit the necropolis? Explore underneath the M2 at Beecroft instead. Just off the Beecroft/Cheltenham Link Track, this subterranean world below the M2 that literally goes on for many kilometers is a strange mix of the natural and the man-made.

6. LAKE MACQUARIE (UNI THAT IS)

Tucked away at the back of Macquarie University is an artificial lake and fountain. Usually filled with hungry ducks and at least one eel, its sunset can rival the Northern Lights. It is well known that some students make out there after dark to the chagrin of the uni’s security guards.

The Coal Loader is a former industrial site that operated from the early 1920s to the early 1990s. It functioned primarily as a transfer depot for coal from bulk carriers to smaller coal-fired vessels. Beneath the platform are a series of tunnels, each with a number of chutes through which the coal was transferred into coal ‘skips’. The site operated for over 70 years before being decommissioned. It was dedicated as public open space and then reopened in 2018. The old wharf and rusting ships now sit on the edge of the water like a great outdoor museum. For the immature, you may laugh at its address: 2 Balls Head Drive Waverton.

The former Eastwood brickworks off Terry Road is now a maze of townhouses and apartments, but traces of its past history remain, including the two great chimneys that stand as rather imposing looking obelisks overlooking the surroundings. Great spot for BBQ and instagram photos.